Prince Harry has demanded an apology from the Royal Family for his wife Meghan, saying: “You know what you did, and I now know why you did it. And you’ve been caught out, so just come clean”.

The Duke of Sussex said “if people had listened” when he first spoke about his concerns, he and his wife would not have had a rift with his family, adding: “That’s the saddest part about it – it was all so avoidable. But they just couldn’t help themselves.”

Prince Harry made the comments in an interview with the Daily Telegraph conducted before the launch of his autobiography Spare, which contained a number of controversial claims against his family.

It is not made clear what he is asking his family to apologise for, but Prince Harry has in the past spoken about royals who have been opposed to his relationship with his wife.

Prince Harry also said in the interview he was confused as to why it seemed so “shocking and outrageous” that he was trying to tell what he called the “truthful” side of his story, adding he wanted to continue “the good fight” by standing up for his wife, and encouraging other men to do the same.

“If you don’t lead by example, what is the point in living?” he asked.

In the interview, Prince Harry also said he felt some “responsibility” to try to reform the monarchy for the sake of his brother’s children – nine-year-old George, Charlotte, 7 and four-year-old Louis.

However, he revealed that sense of responsibility frustrated Prince William, saying: “He has made it very clear to me that his kids are not my responsibility.”

Despite that, he told The Telegraph he wanted to “fix” things with “long-term, strategic thinking”.

“I know that I will get crucified by numerous people saying that.” 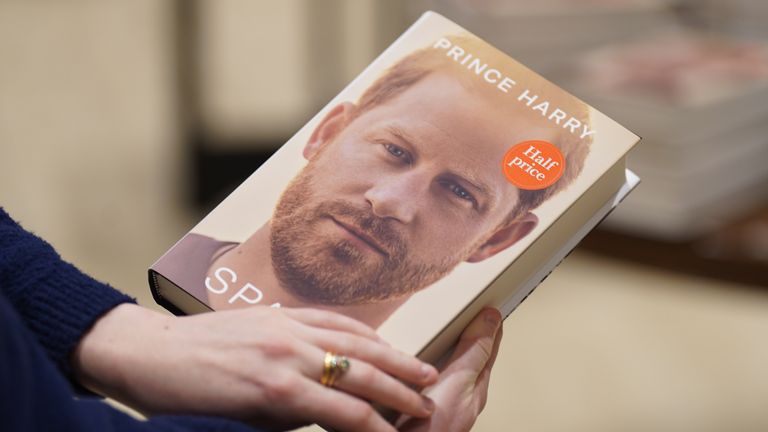 Elsewhere, he explains he told his family that decisions they were making would make them look bad, particularly when it came to Meghan, adding that while they may not like him now, they would thank him in the future for talking about his issues.

He also referenced his previous revelation that he didn’t cry over his mother’s death, saying it was only after taking ayahuasca, a hallucinogenic, that his mother just wanted him to be happy, and it did not matter that he hadn’t cried.

The duke revealed that he could write another book, saying he had enough material after cutting his page count in half from his draft. ‘Are you hurt by comments in Harry’s book?’

“The first draft was different. It was 800 pages, and now it’s down to 400 pages. It could have been two books, put it that way. And the hard bit was taking things out,” he said.

“There are some things that have happened, especially between me and my brother, and to some extent between me and my father, that I just don’t want the world to know. Because I don’t think they would ever forgive me. “

He also added the media has “as***-tonne of dirt on his family… and they sweep it under the carpet for juicy stories about someone else.”

The Duke of Sussex has taken part in a media blitz in recent days, which included interviews with ITV’s Tom Bradbymore Stephen Colbert and CBS in the US and Good Morning America.