Joseph Parker beat Jack Massey but went the full 10 rounds as Frazer Clarke outclassed Kevin Espindola on the Chris Eubank Jr vs Liam Smith undercard at the AO Arena in Manchester on Saturday.

Local man Massey had a tremendous reception when he entered the Manchester Arena. But previously a cruiserweight Massey was having his first bout at heavyweight against a former world champion in Parker.

Parker, with current WBC heavyweight Tyson Fury cheering from ringside, served notice of the difference in size and strength with three rapid left hooks to start the fight.

Massey blinked underneath those punches and wrapped up Parker in a clinch.

Then he surprised Parker, and the crowd, with a massive right cross to the New Zealander’s chin.

But he could not capitalize. Massey moved off and Parker got back to work. In the third round Parker’s right clubbed Massey round the side of the head.

As Massey retired Parker would pick up round after round, but still had to work to land decisive blows.

In the sixth round Parker drove his right hand down and Massey felt the weight of the cross. The New Zealander got reckless though as he hunted for a breakthrough and instead wandered on to an uppercut.

Heartened Massey popped in a cross and left hook to start the seventh round but quickly Parker reasserted his control.

Boxing negatively Massey had a point deducted for holding in the eighth. He needed a huge turnaround going into the last two rounds. But could not find it.

They had a brief, furious exchange in the 10th round but Massey was not strong enough to stand his ground with Parker.

Popular Olympic super-heavyweight bronze medallist Clarke dominated Argentina’s Espindola, who retired on his stool after four rounds. It had been scheduled for six.

The big man from Burton worked Espindola into a corner early in the first round and ripped in shots to the Argentine’s midriff.

Clarke connected with a short right but Espindola found some breathing room with his own right looping over the top. Clarke though soon resumed his work. 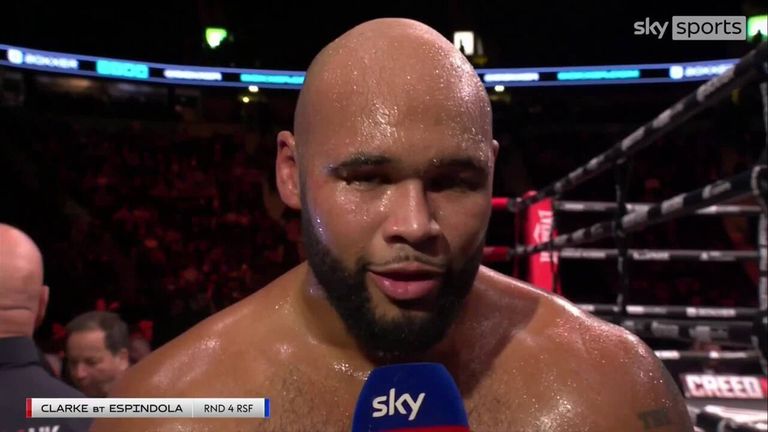 In the break after the first round Espindola began to hold his arm gingerly as if he was hurt but he still answered the bell and fought through the second.

Clarke continued to target the body. Occasionally the Argentine answered with a brace of punches to Clarke’s body and the occasional jab.

But the heavy duty strikes all came from Clarke. In complete control in the fourth, Clarke began to vary the weight and pace of his punches continuing to overwhelm Espindola. The Argentine nodded when he took a jab, out of ideas as ambition leaked away from him.

Shaking his head when he went back to his corner, Espindola did not emerge for the fifth.

“I felt like it was a good performance,” Clarke reflected afterwards. “He said he had the arm injury but I was hitting him with some heavy shots.

“He’s a very tough man, and dangerous at times.

“A couple of times I lost concentration and got hit by a big shot. He could have taken me out.” 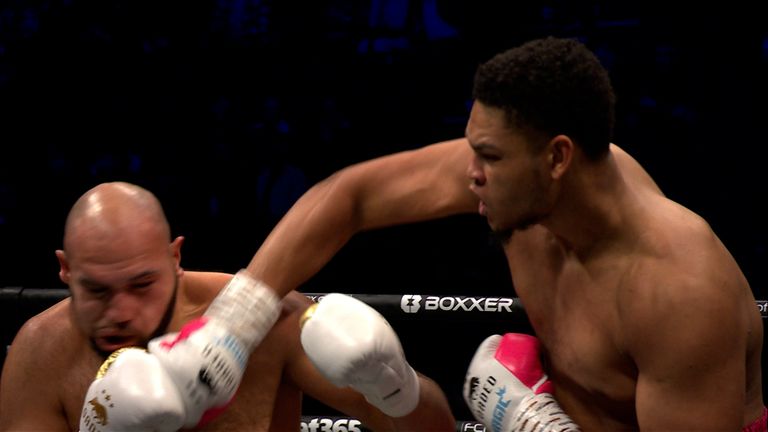 Matty Harris is proving to be a problem at heavyweight with his third first-round knockout in a row!

Matty Harris towered over Jiri Surmanj and used that range, jabbing before he smashed his right down. Surmanj’s legs stuttered beneath him when he took that shot and he wobbled a few steps back. Harris rushed after him but the referee stopped Surmanj at 1:14 of the first round before Harris could take the final chance to knock him off his feet.

Scott Forrest started busily against Amine Boucetta, cracking his right hook to the body, then launching it straight to the head.

In the second round he drilled him with a hard one-two and would not let the Belgian settle. He forced Boucetta into the ropes and kept him under pressure as Boucetta tried to sway away from the punches flying in.

Boucetta rushed the Scotsmen when he could. But though he became more active himself he couldn’t dissuade Forrest. Boucetta took his licks though and lasted six rounds, Forrest winning 60-54.