NASA‘s James Webb Space Telescope (JWST) has released yet another new image, providing new insights into how stars formed in the early universe more than 10 billion years ago.

The image shows a young cluster of stars NGC 346, which is more than 200,000 light-years from Earth.

Located in the Small Magellanic Cloud (SMC) – a dwarf galaxy near the Milky Way – NGC 346 is interesting to astronomers because it resembles the conditions of the early Universe when star formation was at its peak.

Astronomers believe studying this region could help shed light on how the first stars formed during the ‘cosmic noon’, which is only two or three billion years after the Big Bang. 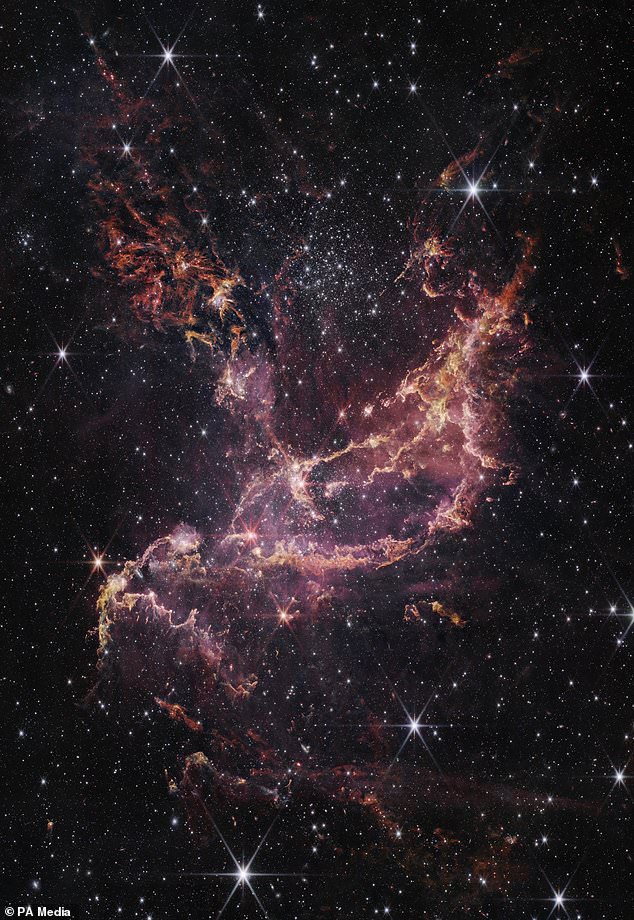 NASA’s James Webb Space Telescope (JWST) has released yet another new image, providing new insights into how stars formed in the early universe more than 10 billion years ago. The image shows a young cluster of stars NGC 346, which is more than 200,000 light-years from Earth

Instruments on the James Webb telescope

NIRSpec (Near InfraRed Spectrograph) will also perform spectroscopy over the same wavelength range.

MIRI (Mid-InfraRed Instrument) will measure the mid-to-long-infrared wavelength range from 5 to 27 micrometers.

FGS/NIRISS (Fine Guidance Sensor and Near Infrared Imager and Slitless Spectrograph), is used to stabilize the line-of-sight of the observatory during science observations.

The SMC contains lower concentrations of elements than hydrogen or helium, which astronomers call metals, compared to the Milky Way.

Since dust grains in space are composed mostly of metals, scientists expected there would be low amounts of dust, and that it would be hard to detect.

However, the new data from Webb reveals the opposite.

‘A galaxy during cosmic noon wouldn’t have one NGC 346 like the Small Magellanic Cloud does; it would have thousands’ of star-forming regions like this one,’ said Margaret Meixner, an astronomer at the Universities Space Research Association and principal investigator of the research team.

‘But even if NGC 346 is now the one and only massive cluster furiously forming stars in its galaxy, it offers us a great opportunity to probe conditions that were in place at cosmic noon.’

The NGC 346 houses protostars – clouds of gas and dust in space that are developing into stars.

Previous infrared studies of the star cluster have focused on protostars heavier than about five to eight times the mass of our Sun.

‘With Webb, we can probe down to lighter-weight protostars, as small as one tenth of our Sun, to see if their formation process is affected by the lower metal content,’ said Olivia Jones, Science and Technology Facilities Council Webb Fellow at STFC’s UK Astronomy Technology Centre. 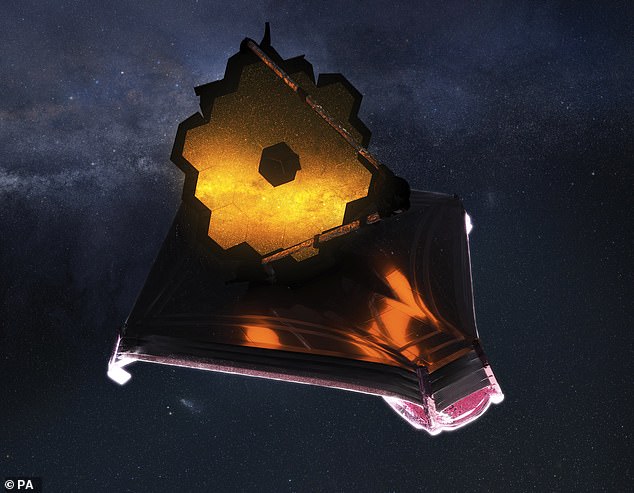 ‘With Webb, we can probe down to lighter-weight protostars, as small as one tenth of our Sun, to see if their formation process is affected by the lower metal content,’ said Olivia Jones, Science and Technology Facilities Council Webb Fellow at STFC’s UK Astronomy Technology Center

As stars form, they gather gas and dust, which can look like ribbons in Webb imagery, from the surrounding molecular cloud.

The material collects into an accretion disk that feeds the central protostar.

Astronomers have detected gas around protostars within NGC 346, but Webb’s near-infrared observations mark the first time they have also detected dust in these disks.

Guido De Marchi, of the European Space Agency, and a co-investigator on the research team, said: ‘We’re seeing the building blocks, not only of stars but also potentially of planets.

‘And since the Small Magellanic Cloud has a similar environment to galaxies during cosmic noon, it’s possible that rocky planets could have formed earlier in the Universe than we might have thought.’

Researchers hope that observing protostars still in the process of forming will reveal whether the star formation process in the SMC is different from what we observe in our own Milky Way.

Ms Jones added: ‘This is the first time we can detect the full sequence of star formation of both low and high mass stars in another galaxy.

‘This means we have far more data to study at high resolution, offering us new information on how the birth of stars shapes their environment and even greater insight into the star formation process.’

If you enjoyed this article:

Sonic boom several times larger than our Milky Way that was released when a galaxy cut through Stephen’s Quintet at 1.8 million mph is captured by NASA’s James Webb Telescope

The James Webb Telescope: NASA’s $10 billion telescope is designed to detect light from the earliest stars and galaxies

The James Webb telescope has been described as a ‘time machine’ that could help unravel the secrets of our universe.

The telescope will be used to look back to the first galaxies born in the early universe more than 13.5 billion years ago, and observe the sources of stars, exoplanets, and even the moons and planets of our solar system.

The vast telescope, which has already cost more than $7 billion (£5 billion), is considered a successor to the orbiting Hubble Space Telescope

The James Webb Telescope and most of its instruments have an operating temperature of roughly 40 Kelvin – about minus 387 Fahrenheit (minus 233 Celsius).

It is the world’s biggest and most powerful orbital space telescope, capable of peering back 100-200 million years after the Big Bang.

The orbiting infrared observatory is designed to be about 100 times more powerful than its predecessor, the Hubble Space Telescope.

NASA likes to think of James Webb as a successor to Hubble rather than a replacement, as the two will work in tandem for a while.

The Hubble telescope was launched on April 24, 1990, via the space shuttle Discovery from Kennedy Space Center in Florida.